The Story of Sophia: The Luckiest Chicken in the World 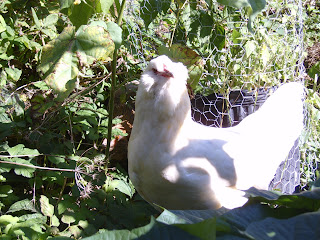 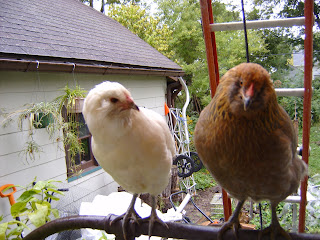 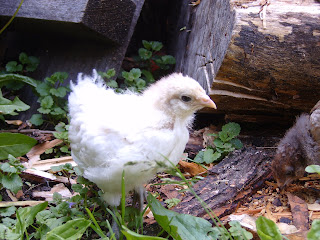 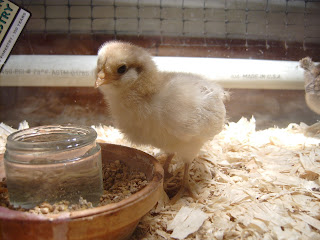 We lost our little "yellow bird," last Thursday, March 19th. Sophia (full name: Sophia Fezziwig Chicken) was always enthusiastic, always the first one out of the coop in the morning, chirping and clucking, She never slowed down until sundown told her it was time to go up to roost. That day was no exception. When I went out in the backyard to check on them in early in the afternoon, though, Sophia couldn't stand on her own, and while she didn't appear to be in any pain, she wouldn't eat even her favorite noodles nor drink any water. The kind veterinarian at the Emergency Clinic for Animals was unable to save her, and she passed away that evening.

The vet is still trying to figure out exactly what happened, because their grain mix (18 different grains!) is 18% protein---the % that our research indicated was appropriate---but the condition of Sophia's liver seems to indicate she was eating too much protein. Why is now the question. Moreover, she also may have died from that problem, plus a birth defect, as well as an acute condition such as having eaten moldy birdseed from the outdoor birdfeeder, or even from the supply in the coop. The small container in the coop that they ate from had probably not gotten eaten down to the bottom during the winter, and just a few days before, it had gotten knocked over. She might have eaten the feed that was at the bottom, which may have grown aflatoxin (which is about as dangerous as it sounds, both to chickens and humans). In other words, it might have been our fault that she died. Needless to say, we want to do everything we can to fix the problem, and make sure it doesn't happen again; we've moved the coop and cleaned everything, taken away the birdfeeder, swept up all the old grain, etc. Sara seems to be fine, but is now on a special diet---cooked brown rice, leafy greens and veggies and fruits only---and upon the advice of the vet, we'll be giving her milk thistle tincture to cleanse her liver, just in case.

The three nights that Sara spent alone were clearly distressing ones for her. During the day, she spent much of her time standing under the rosebush in the corner, not doing much, and sought us out whenever she could; she also didn't want to go in the coop at night. The second evening, I was sitting with her for a bit, and she jumped up on my lap, something she'd never done before---never being as affectionate as Sophia---and then started climbing up onto my shoulder and head. I realized that this was like what she used to do with Sophia, when the two of them would scramble over one another in bedding down for the night, deciding who was going to get comfortable. Clearly, we needed to find Sara more hen sisters, and fast!

Happily, yesterday some generous folks who had more chickens than they needed gave us two Rhode Island Red hens, 2 year-olds. These folks hadn't named their chickens; it feels funny not to call them something, but we're waiting to see what they're like first. Both are somewhat shy and nervous. They're almost identical in appearance, a beautiful deep red chestnut brown color, but the larger hen has a black feather in her tail and is a little bolder, and the other has lighter colored feathers at the ends of her wings, and is the shyer of the two. Unlike Sara and Sophia (Aracauna chickens), they have big, floppy combs and full wattles, and their combs are different, too. They cluck softly when interested in something, becoming much more vocal when they're confused or afraid. The bigger hen and Sara tangled at first, which is normal, (if worrisome to watch. Eventually, Sara asserted herself as queen of the coop. (It was the same with Sophia and Sara---Sara was top chicken.) It looks like they're all going to get along fine, now that the pecking order has been established. Best of all, after they all went up into the coop last night, Sara was singing, which she hadn't done since before Sophia died.

We'll always miss our cute, curious little girl, who trusted people and always wanted to be picked up and petted by everyone she met, but it helps to remember that Sophia was one very lucky little chicken. A million chickens are killed every hour in the U.S. alone. We were very lucky to have known her.
Posted by Marina and Steve at 2:38 PM