I just got back from Minneapolis from the Their Lives, Our Voices conference put on by Compassionate Action for Animals a few days ago. It was so inspiring to spend the weekend with a large group of people who have been awakened to the reality of the lives of farmed animals. I made some wonderful new friends, and we ate great vegan food together, some of it at the conference, and some at area restaurants. Particularly good was The Hard Times Cafe, where I went for my usual morning soymilk cocoa as well as a few meals, one of which included a veganized Banh Mi sandwich. In between the excellent talks, I bought a book, "An Offering of Leaves," by Ruth Lauer-Manenti, a yoga teacher, that is continuing to inspire me, too.

It's a collection of dharma talks in the form of stories from her life about her yogic commitment to ahimsa (non-violence), compassion, and service. One of the things mentioned in the book is the importance of sharing insights into the nature of reality with others. This is something that is often difficult for me, as I tend to be so very certain of things. Since I was trained to be a teacher, I'm talkative and like to share my insights, but I don't always listen well to others.

The conference was mostly about animals who are farmed for their flesh, milk and eggs, how they are treated and killed, about how to do vegan outreach, working with the media to get the message out, etc. It's a healing and exciting place to be, and it's easy to see myself taking action when I'm in a supportive place like that, but I always dread a little the going back out into the world to talk about it to other people. I got a chance to do that right away, though, before I even left town.

I was having breakfast at The Hard Times cafe with one of my new friends, when a taxi pulled up outside just as I was thinking it was time I called one. The driver was just stopping to get coffee, but was happy to have a fare. On the way to the bus station in the rain, he asked me what I'd been doing in Minneapolis. It wasn't easy to say that I'd been at an animal rights conference, because I knew the conversation from that point might be very difficult, but I said it, anyway, feeling a little like I was jumping into deep water. He asked me about what he'd seen recently on tv, some undercover slaughterhouse footage, and said he hoped it was unusual. "Don't they usually kill them humanely?" he asked, putting his finger, like a gun barrel, up to his temple.

We talked some more about the (impossible) idea of "humane slaughter," sitting in the cab outside the bus station, watching the rain fall around us. He had very long white hair and sad eyes in a soft, round face. I liked his gentle voice and the fact that he became so interested in what we were talking about that he had nearly had an accident. He said that he would stop anyone who tried to kill his dog for food, and agreed that if a hurt, bleeding calf appeared on the street at that moment, he would want to help however he could.

He said he actually doesn't eat much meat because he can't afford it. "But I tried a veggie burger, and it tasted like, well...you know..." That was funny to both of us. He agreed to give Tofurky brats a try, adding that come to think of it, his favorite food is Chinese food "that's mostly vegetables, anyway."

Then he told me that when he was a child his family had a big garden, and his mother grew "just about everything: rhubarb, brussel sprouts, tomatoes, sweet corn. And we had an apple tree and a peach tree, too, next to the garage, and I used to sit up there on the garage roof, waiting for my dad to come home, just eating peach after peach. He'd get so mad, not because he minded me eating the peaches, you know, but because I kept throwing the pits down on the ground, and he didn't want all those peach trees growing up all over the place."

The image of him as a little boy in a beautiful vegetable garden, eating peaches and planting new peach trees, was such a contrast with what we had been talking about, the killing of animals for food, the awful vision of the slaughterhouse, of death and cruelty. Talking with others about what they can do to stop participating in violence against animals can be so difficult, but it can also be transformative. Deciding to step outside of the safe feeling I had carried with me from the conference so soon was hard; there was a conflict in me. It's not something I can do every time the opportunity arises, but I am very grateful that I had the chance to be honest, to listen to this man, and also that he took the chance to listen to me. It's good that I have my opinions, my knowledge. But that knowledge should lead me to communicate with others. 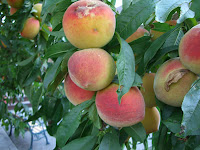 What a great post! In fact, I just got back (on Friday) from visiting my daughter in Minneapolis, and she took me to Hard Times for the first time. Both daughters and I loved it!

That's quite a coincidence! What did you have to eat?