Bird Brain is a Compliment

After reading this on goveg.com's "Top 10 Reasons Not to Eat Chickens"...

"Several recent studies have shown that chickens are bright animals, able to solve complex problems, demonstrate self-control, and worry about the future. Chickens are smarter than cats or dogs and even do some things that have not yet been seen in mammals other than primates. Dr. Chris Evans, who studies animal behavior and communication at Macquarie University in Australia, says, “As a trick at conferences, I sometimes list these attributes, without mentioning chickens, and people think I’m talking about monkeys.” Dr. John Webster of Bristol University found that chickens are capable of understanding cause and effect and that when chickens learn something new, they pass on that knowledge (i.e., they have what scientists call “culture”). How does your IQ compare to that of a chicken?"

...I decided to try one of the experiments (from the page in the "How does your IQ compare..." link). After all, every time we ask Rose, June and Sarah who the president of the United States is, they answer correctly, with a prolonged "Barrrrrraaaack!" Actually, it's usually June who answers; she's the most vocal, or perhaps just the most political-minded. But I digress...

At any rate, I discovered that our chickens are indeed able to understand that objects still exist even after they are hidden or removed from view, a level of cognition that is actually beyond the capacity of small human children. Bringing the much-beloved tomatoes-and-brown rice treat out to the backyard, I showed Sarah and Rose the food---June was clucking quietly to herself up in the nest box, and thus unavailable---and let them have a little bit, and then hid it away behind a stump. They looked at me for a moment, and then proceeded to ignore me. Sarah started pecking around in the grass for bugs, and Rose began preening herself. But when I tried it a second time, they knew I still had the food! "Look, empty hands," I told them, and busied myself with other things. Nothing doing---weren't forgetting about those luscious bits of August juicy tomato-soaked rice. Of course, I rewarded them with the food. They definitely knew that food was still around. 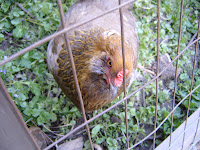 (Here's a picture of Sarah looking very skeptical, as she often does.)

Here is something else the girls would no doubt like to eat, but can't, as it's up too high for them to reach: a monarch butterfly caterpillar...and the chrysalis that it (or one of its many siblings) formed, hanging on one of the swamp milkweed plants in the backyard. 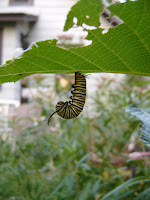 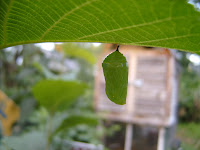 Posted by Marina and Steve at 3:28 PM