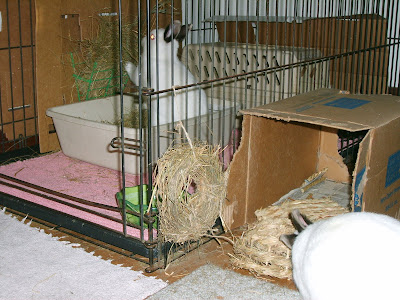 Today was an ordinary day for Charm and Peridot until about 2pm, when their Aunt Denyl cameover to help me trim their claws. Since they so dislike being picked up, this is a real ordeal, but it does need to be done every 3 or 4 months to prevent their claws from growing so long that they curve back into their pads. Denyl is an expert at all of this, and I am not---that's where the problems came in. Rather than holding them while she did the trimming, I took the scissors. Even though she has dark nails, so it's harder to see the quick, I did fine with Charm's nails. Peridot was another story, even though he has light nails, and I hit the quick with the 4th or 5th nail. It took probably 45 minutes to get the bleeding to stop altogether, using pressure, flour and facial tissues. Fortunately, Denyl knew what to do. It was astonishing and a litle sickening to see how much blood there was, although he didn't seem to be in any pain. Now, we need to keep a very careful eye on him to make sure it doesn't start up again. And I plan to keep a veterinary stypic stick on hand for the future, and/or take them to the vet for their next nail trim, just to be on the safe side. 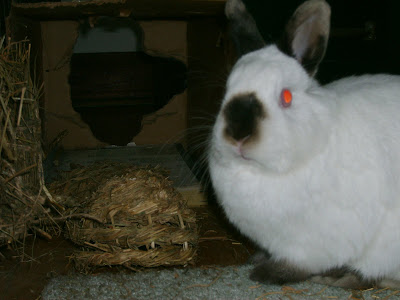 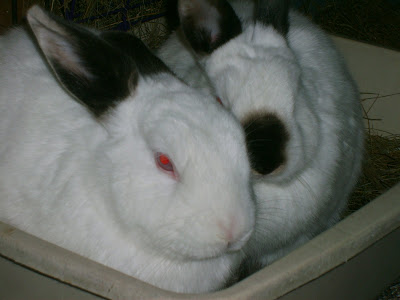 Other news of the week is that our friends Tara and Thad's shiitake mushroom farm that we got Thad for Xmas took off so quickly that they already have mushrooms---after only a week! Here's Thad contemplating the mushrooms and sampling some pasta primavera Tara made from them. I love the idea that you can grow your own mushrooms inside so easily. It kind of gets to be a habit. The kit came from Field and Forest in Peshtigo, Wisconsin, so it wasn't shipped from very far. 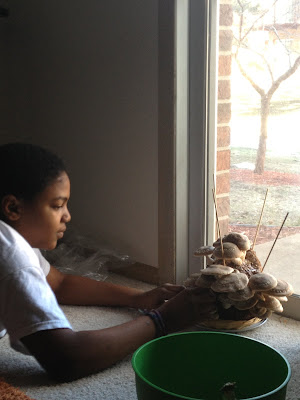 It has been so cold for the past two days (around zero F this morning) that it's hard to believe that just a few days ago, it was in the low 40s, so that we were able to let the chickens out into the yard for a while. Here's Frieda strutting across the snow, and Annie and Frieda sampling some collard greens from my hand while they take the fresh air. Carlie and Emily were more conservative, preferring to spend time outside in their covered yard. All four girls were more than ready to get back into their relatively warm coop in less than an hour. While they do want attention and need mental stimulation at this time of year, they don't want to go outside unless it's above frezing and there's not too much snow on the ground. 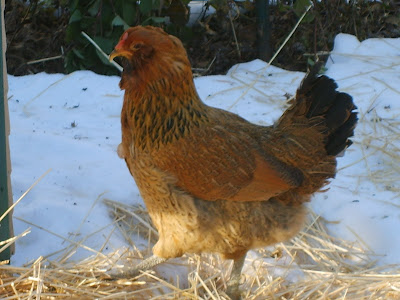 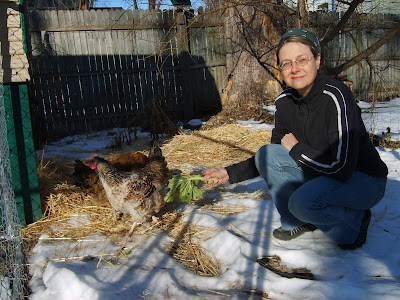 Some online research into family history this week led me to discover a website with Nebraska tombstone photos. It's easy to find whoever you are looking for----assuming they are in there, at least, and my father and paternal grandfather are not, yet---and I found this photo of my maternal grandfather. Since I've never seen the gravestone itself, it was an odd feeling to suddenly see it there on my screen. The next time we visit my cousins in Walthill, we will definitely go to the cemetary. 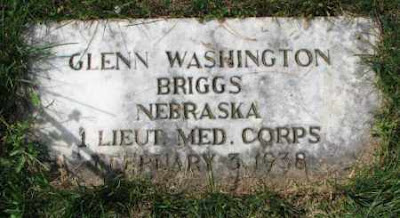 A Cooper's hawk visited the backyard for an hour and a half last week, just hanging out. I don't think the chickens could see the hawk (him? her?) from inside the coop. It didn't seem as though s/he even caught any mice, although there are lots back there to be caught. 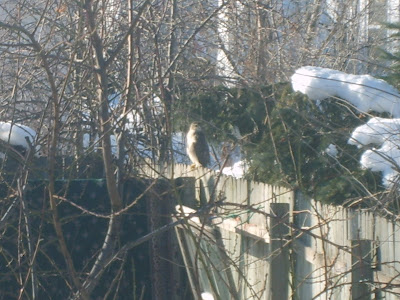 While the chickens don't normally lay more than a few times during the winter months, I thought I'd post this photo of what we do with the chicken eggs: Breakfast of Chickens, aka eggshell omelettes. Steve does eat a few, too. I avoid them. The idea of eating chicken menstrual periods is pretty repellent. 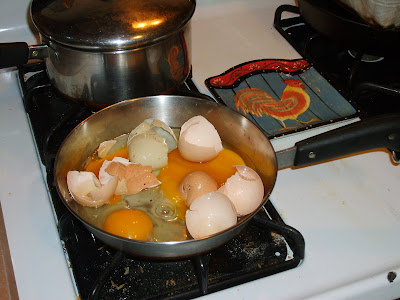 We recently attended a memorial (we're there, in the background) at the Wisconsin DNR for the 117 wolves who were killed this winter by Wisconsin hunters. There were 118 candles lit, the one extra one for the wolves who were no doubt killed but not reported. It's a sad time to be a wolf, but we are hoping that the government will come to its senses, eventually. 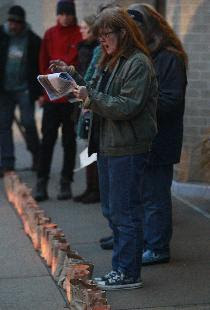 Posted by Marina and Steve at 7:33 PM