AKA Sophia and Sara Fezziwig Chicken (L to R). (I gave them the middle name of Fezziwig because they have what look like sideburns, reminiscent of the character Fezziwig in Charles Dickens' "A Christmas Carol.") Here they are in August, at about three and a half months, perching on our back porch railing, hoping for special treats before bedtime. Little blue eggs appear in their nest box every other day or so. (Sophie was the first to lay, back in early November.) What are vegans doing with chickens and eggs?! (You might be wondering.) Even though we don't believe that humans need to eat animal products to be healthy, we have eaten a few eggs from time to time from my (vegetarian) sister-in-law's rescued chickens. When we started getting involved in and learning more about sustainability and permaculture, keeping chickens for eggs became a question for us since eggs are one way of getting protein without wasting alot of resources to do it. We still aren't entirely comfortable with it. But most vegans were vegetarians first, and we do plan to sell some of the eggs. If folks are transitioning from veggie to vegan, or even if they never even go veggie, better that they eat eggs than "meat," and better that they get those eggs from chickens who are treated well in every way, and who will never be slaughtered, whether they are laying or not. 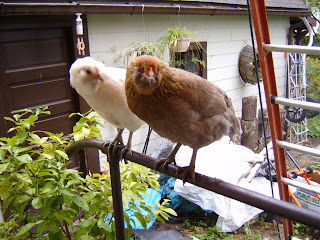 Now that it's winter, Sara and Sophia live in a wonderfully snug coop that Steve built for them, where they can go out into an enclosed space during the day, and peck at their head of cabbage, as well as other morsels (soy okara, rice, tomatoes, plums, any kind of greens, and tempeh are favorites). They can go back up into their loft bedroom any time they want, where they have a heater. The temperature is easily monitored indoors, and if it starts getting too cold out there, we heat up big cans of water (empty olive oil cans) in the oven for them.

Their personalities are so different---Sara is the leader, but Sophia is more outgoing. Where Sara holds back, Sophie rushes in enthusiastically. For months, they were wild for worms, and would rush to wherever Steve was digging in his gardening to look for them. By the time fall came, they were less interested in worms, though, maybe knowing their protein needs had changed? They're very happy girls, and love to be held and scritched around their neck feathers.
Posted by Marina and Steve at 5:56 PM

Your chickens are so cute!