Pollinator's Eye View of Our Back Forty (Feet) 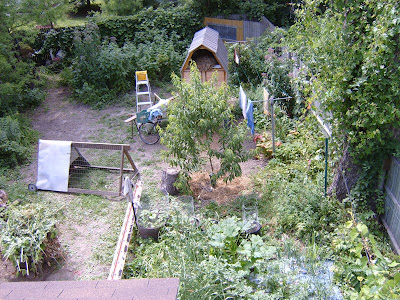 Before it gets too cold and snowy for photos of the lush green garden to start feeling like a distant memory, here's a bird's or pollinator's eye view of our backyard, aka the Back Forty Feet, a photo taken in late July, in full summer bloom. You'll see the chicken tractor over on the left, along with a wheelbarrow full of various invasive plants. Our year-old peach tree (which has doubled in size and produced only teensy little inedible fruits this year but should bear good fruit next year) is blocking the view of the chicken coop, which was in a good "summer" location at that point---not in too much sun and so as to catch the breeze. Keeping chickens cool is important. It now has wheels and can be moved more easily around the yard. Mulch under the peach tree is hay from the chicken coop.

There aren't as many flowers in our yard as we'd like, but there just isn't that much sun; we hope to add more eventually, though. There are stands of day lilies that threaten to take over, underneath the clothesline, mostly; Steve's cousin Matt worked very hard to dig alot of them out this summer. Here you can see Joe Pye weed in flower towering over the red raspberry bushes, just to the left of the chicken coop; the black and purple raspberries are to its right, and also over by the fence on the left side of the yard, just west of the fern garden. Back in the far corner on the left is the compost heap, with the shiitake mushroom logs nearby. (This winter, we'll try to devote a whole posting to the great 2007 innoculation of the mushroom logs.) Wild grape and a trumpet vine cover the back fence; domestic grape vines have been planted on the fence near the clothes line, but won't be producing for a while yet. You can also see lots of wild grape vines twining around the phone line that comes from the house (bottom right corner), but the oyster mushroom logs next to the garage (bottom left corner) are out of sight. The invasive wild rose bush at the far end of the clothesline posts will be replaced next year with a native rosebush that doesn't spread wildly and has good quality rosehips that are a good source of Vitamin C. We made a nice rosehip syrup a few years ago, and it was delicious. Somewhere back by the chicken coop and over by the oyster mushroom logs are two hazelnuts, just leafy twigs right now, but within a year or two, they should be producing well. Steve keeps a little herb garden in the area by the back steps, which you can't see (bottom left corner). We wondered for quite a while what all the vines covering the silver maple snag were, and finally identified them: While there is the lovely red and green Virginia Creeper, there's also (ack!) poison nightshade and some other pretty but invasive vine in our bioregion, so we've been removing those. Tricky without pulling other things out... On the bottom right border along the fence there is a forsythia bush, also solomon's seal, bloodroot, may apples, wild ginger (which we have yet to try), bluebells, jack in the pulpit, and at the foot of the snag are crocus and trilliums.

And what's in the garden, which is the whole bottom right quarter of the photo? Zucchini, sweet potatoes, squash, Swiss chard, broccoli, and probably some other things. Our other gardens plot is a community plot a couple of blocks away, and that's where Steve grows potatoes, tomatoes, peas, sweet corn, peppers, onions, and other veggies. The garden deserves its own post...in the winter, when we've got more time...

In the other (far right) corner of the yard is the honeybee hive, our newest addition! When our friend Eric, who knows about these things, moved away at the end of June, he sold us one of his honeybee hives, and our neighbors have one of the others, just on the other side of the fence. Steve built this little fenced-in corner to protect curious felines, and the screened portion is so the bees' flightpath isn't blocked by the fence. They've made honey, but there's only enough for them for now; we hope that we can safely share some of it next year. From Eric, we've learned that honey bees aren't as important as pollinators as native bees, like mason and leafcutter bees. These wild bees help increase crop yields. If you look very carefully, you'll see just to the right of the silver maple snag, high up on the fencepost, a wooden block that is nearly hidden in the leaves. This is one of our two homes for leafcutter bees in our backyard. For more information about how you can help native bee populations and become active in pollinator conservation, go to The Xerces Society for Invertebrate Conservation's webpage on pollinator conservation:
http://www.xerces.org/pollinator-conservation/
Yes, I am lame and lazy for not making this a link, but you can also click on the post title to go directly to that page.
Posted by Marina and Steve at 6:49 PM