Listening to The Voices

Yesterday morning, I was busy getting ready to leave the house for my annual mammogram. This week was the five year anniversary of my cancer diagnosis, so I was a bit preoccupied. An apple crisp was baking in the oven, and I had to keep on eye on it as well as on the cats and the chickens, at the same time making sure I had all the lists and bags and such that I needed for the several errands I planned to run afterwards. Then I looked out the front window and saw Tina, one of our neighbors, kneeling on the bike path in the park across the street, holding her hand out to a slender, medium-sized black dog. I remembered Steve's telling me yesterday that he thought there might be a stray dog in the park. The dog had fled as soon as he came out on the porch, and he'd been afraid to pursue her; he didn’t want to frighten her towards the busy street to the north, half a block away.

Watching Tina coax the dog with little luck, I thought about what I should do, one eye on the clock. Here came another neighbor, Leila, with her beagle mix, Bonnie, safely on her leash, as always. The black dog wagged her tail, sniffing Bonnie, but raced far away as soon as either human made a move towards her. I thought to myself, "Well, she's in good hands, I don’t need to do anything. They’ll take care of it." But I kept coming back to the window. The black dog was soon alone in the park again. I called the police dispatch number, and was told someone would call me back. Nearly 45 minutes passed. I went outside with an open can of cat food, but the black dog wouldn't come within 100 feet of me. She skittered about the park, shy, aimless and disoriented, and ever closer to the busy street. I felt disoriented, too; I don't have much experience with dogs, and didn't really know what to do. She was just close enough for me to see her dark collar and tag, but it was obvious I wouldn’t be able to get ahold of her. When bicyclists came down the path, she hid in the bushes. I left the cat food at the foot of a tree in the park, and went back home.

Washing up, brushing my teeth, gathering my knapsack, and so on, I kept thinking: I should call the 24-hour emergency clinic for animals. Why wasn’t exactly clear. They're a vet clinic, after all, not a clearinghouse for lost pets. I made a few more phone calls, hoping to find someone else, (read: a Dog Person), who could come over and catch her. No luck. But finally I listened to that little hovering, pesky cloud of a thought telling me to call the emergency animal clinic. "I don't really know why I'm calling you," I told Lori, the woman who answered. Her voice sounded puzzled and curious, and she said, "Where do you live?" I was already puzzled, and then I got curious, too---I told her where I was, and Lori said, "Is it a black dog?" A man who lived just a few blocks away from us had told them he'd lost his young black female dog. I called this man, Rick, and somehow, he was at home, hadn’t yet left for work. He exclaimed excitedly, “Try calling her! Her name is Baby Girl!" While we were still on the phone, I went out and called. “She stopped running,” I told him. Within a few minutes, Rick was pulling up in his black car, and running into the park towards the black dog, calling her name, and she was leaping into his arms and licking his face. I'm so glad I listened to that little voice! 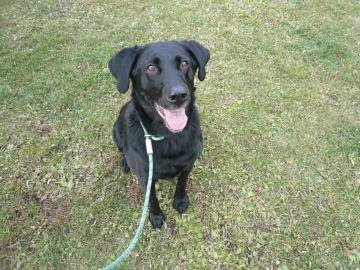 Baby Girl looks pretty much like this dog, whose name is Rogue, who is one of the dogs up for adoption at the Dane County Humane Society.

Good story. I am glad the doggie found it was home!

I just hope she didn't throw up all that cat food all over the back seat of the car! If I see her out walking with her people, I'll try to get a photo of them and post that, too.

Your post brought tears to my eyes. Thank you for being the one to take the time to set this reunion in motion.

And I wasn't even late for my appointment! Happy Tofurky Day! :)