We had a lovely surprise yesterday: Steve's beautiful purple photo, "Walking the Rails," won an Honorable Mention in the "That's Soooo Madison!" photo contest, and publication in the "Isthmus" newspaper this week! It's online, too, of course. Click on the title to go to the link---it's the 10th photo in the slideshow. (That's me falling off the rails into the sunset in late winter of 2005) This is the second time Steve has had a photo published in Isthmus; the last time was in their 2008-09 "Annual Manual," a guide to Madison. (That photo was one he took of himself skiing in some very nice fluffy snow, by the Monona Terrace Convention Center at night in February, 2008.) If it's online, we don't know where it is...

To see another of Steve's prize-winning photos published on the Internet, (and find out how I got the nickname Goatgirl!), scroll down the sidebar here to the right, and click on Lance Armstrong at around 6:31pm. That photo was taken in 2001, and won second prize in humanclock.com's photo contest in 2002.(The first prize winner was of a little girl and a very attractive jellicle (aka black and white) cat, and we had to concede that it was more worthy of first prize.) The prize was a very nice postcard of the Adelaide Railway Station that Dave, the talented, funny and nice creator of humanclock.com, sent us from from Broome, in western Australia, as he was biking 4,000 miles crosscountry.

Happy Tofurky Day to everyone, especially the turkeys! If you're in Madison, come to the free vegan Thanksgiving dinner sponsored and prepared by Alliance for Animals. 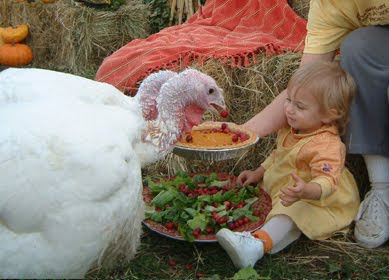 Posted by Marina and Steve at 8:03 AM