Be a Chicken Advocate: The Backyard Chicken Movement 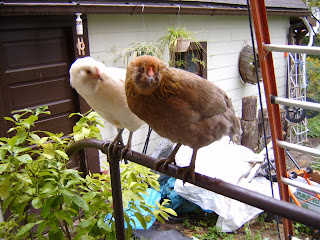 So many people are excited when they hear that we have chickens, and say, "I want to get chickens, too!" After I tell them about what it's really like to have chickens, they aren't always as enthusiastic. The plain fact is chickens poop alot, and they can be a bit noisy. They also require alot of care---it's not like you can just go away and leave them for a weekend, and they need interesting things to do, especially in the wintertime. They need to get out of their coop and scratch around in real dirt, and that means they will eat most anything that they can get to that you've got growing in the ground. Most vets don't know much about chickens, also, so yours might not live very long. So it's not something I recommend to anyone who doesn't really care deeply about chickens. Of course, if someone wants to get them just for eggs or to kill them to eat them, I don't recommend it.

As interest in "urban farming" spreads across the U.S. many cities are considering letting residents keep backyard flocks of chickens. This can present opportunities for people to learn about chickens and other domestic fowl, but also presents challenges regarding the quality of their care and will likely lead to a huge increase in abandoned birds at local shelters. Many urban centers tolerates wanton breeding, swapping, and backyard slaughter, all of which are being actively promoted by many urban farming enthusiasts. Chicken Run Rescue (CRR) encourages animal advocates to take an active role in advocating for chickens and other domestic fowl as this trend continues. Here's what you can do:

* If you live in Minnesota, sign up as a foster or volunteer with CRR to help care for chickens, consider adopting birds who need homes, and apply for chicken permits. (If you're not a Minnesota resident, contact CRR for more information on groups in your state.)

* Become involved in local policy development and standards of care. Lobby for education requirements for permit applicants. Work to ensure that backyard slaughter is prohibited in your city.

* Advocate for roosters - 50% of hatched chicks are roosters and they are killed outright, abandoned, or sold to slaughter. Oppose limits and bans on roosters.

Every year, domestic fowl, mostly chickens, are impounded by urban Animal Control. These birds are victims of neglect, abuse and abandonment, sometimes used as a source of eggs or intended for slaughter, fighting or ritual sacrifice. Some are the discarded outcome of "nature lessons" for children or after a hobby that no longer holds interest. Don't breed or buy- Adopt! There are never enough homes for displaced animals.

I've always been a big fan of "This American Life" and its producer, Ira Glass, so it was great to find this video, where Ira Glass talks with TV host David Letterman about Chickens and why he (Ira) doesn't eat them anymore!
Ira Glass and David Letterman Talk About Chickens
Posted by Marina and Steve at 2:28 PM

This sounds really cool, but I am deathly afraid of birds. Even the thought of having a chicken in my yard scares me!

I used to be scared of chickens, too; going into the chicken area at my sister-in-law's made me very nervous; I worried they would rush me, and try to peck at me, thinking I was after their eggs. That never happened, though I remained wary of them until we got Sara and Sophia as tiny chicks. Raising them and getting to know what chickens are like made all the difference. Our cat Natasha is afraid of the chickens, too, actually, and I don't think we'll try to cure her of that. Sergei, our other cat, just says hey to them on his way by sometimes.