Here's Natasha surveying The Back Forty (Feet), sitting near the 360 degree swivel table Steve made to put the solar oven on... 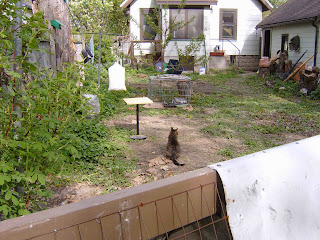 Some things have not gone well on our little homestead recently. First, all of our poor bees died over the winter. We don't know if it was because they had mites, or if there wasn't enough sun behind that bee enclosure, or because there weren't enough consecutive warm days this winter for them to get outside to eliminate, or because the hive got too moist inside. Most likely, it was a combination of all of these things. It's not CCD, that's for sure. Lots of people here lost their bees over the hard winter, including our next door neighbor. And it wasn't that they didn't have enough honey. We had not touched their honey, as they wouldn't have had enough if we did. Now we have about a dozen huge jars of it; Steve spent a very sticky Monday in late March with a rented extractor, and then probably another four hours scraping off and cleaning the foundation sheets, (where they build up the comb for their brood), for the new bees, who are doing well. The new spot for the hive is sunnier, behind a beautiful woven willow gate and chicken wire fence that Steve made to keep the cats from getting too close. The willow branches are from our small willow tree that was so heavily damaged by the December blizzard that it had to be taken down; it had to go anyway, so we could put something that will fruit in, but we were still sad to lose it. 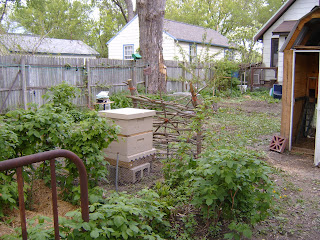 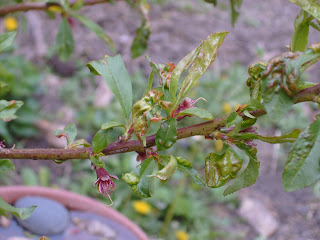 Then we discovered that the peach tree has curly blight. Its first year of blossoming, and so beautiful, but it's not well. The treatment, apparently, is to remove lots of blossoms (more than one would usually) so it doesn't use up all its energy fruiting, make sure to give it seaweed extract as fertilizer and water it if there isn't much rain, then treat it organically with copper next spring.

The back yard, frankly, is a mess---on any trip across the yard, you stumble on clods of bare dirt, scraps of wood, fabric, or metal lying about, or holes that the chickens have scratched up for dust-bathing, or half-rotted sheets of cardboard lain down to help curb the invasive ornamentals. It's easy to catch an ankle in a twist of baling twine or a length of cut raspberry cane or multiflora rose that hasn't yet made it to the compost or stick pile yet. I want it to all look nice and tidy, but am realizing that it's hard to do that and still take care of the earth properly. Practicing permaculture is a SLOW process, so we have to wait and make mistakes.

At least the chickens are all happy and healthy, and the bush cherry is blooming beautifully and looks good. We should have cherries this year. I forgot to get a photo of it, as it's in the front, unlike most of our projects. Steve innoculated more shiitake mushroom logs yesterday. The first set, which might not fruit again, were innoculated in the spring of 2007, and we never got around to posting to show how it was done. He bought spores through the mail, and then drilled holes in oak logs that he got from a big old oak that came down on our friend Glenn's land. (Oak is best because the shiitakes prefer it and it holds its bark longer, so it stays moist longer.) The spores get pushed into the holes with the innoculator tool, and then he seals the hole with melted paraffin. Turns out you can use beeswax, too, and we have lots of that, so he'll use it next time. You'll notice he set up shop in the shade; that's so the open holes don't dry out too much while he's working. 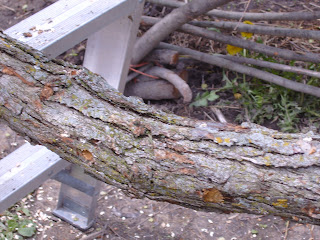 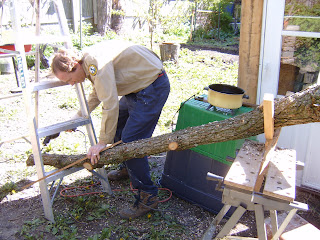 Posted by Marina and Steve at 7:32 PM

Wow, it's a jungle out there! I am sorry about your bees, though! It's always hard to know what happens in nature. Everything is so strong in some ways and so fragile in others. Glad to see the chickens are doing well though.

Well, our bee expert friend Eric had warned us he didn't think the enclosure was a good idea, so...

Yes, the chickens are having a great time right now with the wet weather; the soil is easier to scratch up. They are so fun to watch, and each one with her own personality and way of doing things. We're lucky to have them!