Charm and Peridot Are Here! 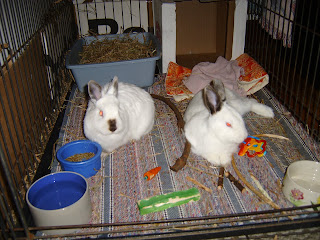 We adopted Charm (on the left) and Peridot from the Humane Society the day before New Year's Eve. Seemed like it would be better to have more than one rabbit, and we were really lucky to find such a closely bonded pair. No need to see how they get along---they already love each other! Peridot is Charm's son, and he was just born on August 5th, thus his nickname, for the birthstone of August. That's also Steve's birthstone. The Humane Society staff weren't sure how old Charm is, since she was a stray, but she seems young. We had also met Opal and Gem, another son and daughter of Charm's (she had four babies, though, and we don't know what the other one's name was), but before we could make up our minds, Opal and Gem were adopted, which was actually great news! As an adolescent, Peridot is very active, more so than Charm, and more of a chewer than he hopefully will be as he gets older. The upholstered blue chair that was in the study had to be removed since he found it tasty (the upholstery itself, not the wood). They spend any hours that we are at work or asleep their very large cage, and are out the rest of the time. They snuggle quite alot and groom each other. Of course, they are both fixed, so there's no worrying about baby bunnies.

Can't tell yet if they are going to be more friendly as they get to know us better, never having had rabbits before. They are so different from cats! You can't just scoop them up and cuddle them, or expect them to come and lie on your lap, either. We haven't even tried to pick them up yet. They don't mind us petting them, but not for very long, and they seem scared sometimes, when we do pet them, so we don't push the issue. So far, they just want to hang out in their one room, the study, which is now half theirs. In our small house, this is quite a bit of space to give up, especially since Sara is still inside in our living room until spring, but eventually, they will come out into the rest of the house, and then we can use the study for other pursuits again. (I guess the blue chair will have to go, though!) 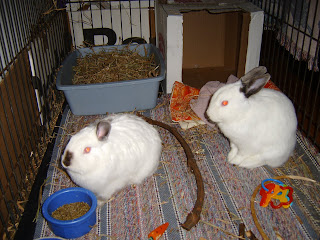 We have found that they both love apples, hay and pellets, but neither of them is that crazy about vegetables. One night, they will eat whatever I put down, and then the next, they ignore it. Kale is not acceptable, ever. Cilantro and red leaf lettuce, sometimes. Dandelion greens and carrot greens are acceptable half the time. Cannned pumpkin was nixed. Carrots are okay sometimes---so much for that stereotyp! Basil is a favorite, but after I gave them about half of Steve's frozen-fresh basil he grew this summer, he put the kibosh on that, and I haven't yet seen any at the co-op. We'll be able to grow them anything pretty soon, but spring is a long way away. Still, despite the fact that we're feeding them greens in the middle of winter that came from who-knows-where, in some cases, feeding them is still using fewer resources than feeding our cats meat, local or otherwise. Charm and Peridot are pretty good about using their litterbox, or at least just the cage.

Red-eyed rabbits are harder to adopt out, we've been told, because some people are freaked out by those eyes, and at first, we thought we might be, too. But we pretty quickly started to think that they are actually pretty interesting, just different. Both these little ones definitely have as much expression in their eyes as any other creature we've known. Their red eyes aren't exactly the same, either. Charm is so cute; she looks like a koala, with her dark brown nose and moustache. Peridot's father must have been a larger rabbit; his head is larger and even his face is shaped differently than his mother's. He loves his set of hard plastic baby keys, and tosses them around a bit. He's more of a chewer, and Charm is more of a digger, but they both love gnawing on the willow twigs Steve tromped out into the snow to cut for them, and they demolished a basket we gave them in a few days. Their tunnel is a big favorite, too. (I'll post photos of that, too, once I get some good ones.)

Natasha, unfortunately, is terrified of them, even after a month, but Sergei doesn't mind them at all. They haven't really realized Sara is in the next room yet; they can probably see and hear her, but don't seem curious yet, anyway. We're really hoping that Tasha will get over her fear of them, soon, because the study used to be her favorite room. Here's Sergei not minding Sara checking out the living room. He's such a sweet, mellow boy. 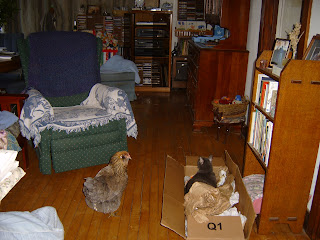 Posted by Marina and Steve at 7:09 PM