Losing June last November was difficult, but we certainly didn't expect that we'd be going through this again less than three months later. Our other little red hen, Rose passed away Friday morning. She would have been four years old in March. Rose died of the same infection that took her sister June. So-called "laying" hens are prone to uterine prolapse since they are bred for maximum egg production, but the vet told us these Fallopian tube infections are also pretty common among chickens, too. Last spring, Rose was showing symptoms, but antibiotic treatment was successful, so that she was strong and vital all summer and through the winter holidays. This time, though, the medicines that we gave her after bringing her and Sara inside our warm house weren't enough.

Rose was Sleepy-Eyed Rose sometimes because her right eye was often not quite open. Like all of our chickens, she quickly learned to recognize us and our voices and her own name, or names, I should say, because we called June "Moon in June," and Sara is sometimes Sara Sarasen (for no particular reason), but Rose had several names, responding to Rose-is-Rose, Rosalinda, and Rosie, as well as Sleepy-Eyed Rose, by cocking her head, chittering and twirping.

Rose's favorite treats, bar none, were bread and tomatoes; she would pick those out of a dozen other treats and race off to gobble them down. No piece of bread was too large for Rose, and two weeks before she died, she made her last little flight from the top of the ladder in the coop to get some bread that she saw in my hand. She also loved raspberries, sunflower seeds and kale. As the omega chicken, i.e., third in line out of three, Rose knew her place, and accepted it humbly. June was always her good buddy. Chickens maintain a social order in which every member of the flock has a place and finds a place. At night, Rose and June roosted together on a shelf up in the coop's heated bedroom, and Sara took the perch. These groupings were somewhat, but by no means, rigidly territorial, and they shared the yard the same way. The day's chosen dustbathing spot was first used by Sara, and then Rose and June would roll ecstatically together, sometimes on their backs, pecking at bugs in the dirt, and raking in particles of earth with their beaks. Having come from to us originally from a rather barren coop without hay, and with only a packed, bare dirt run to explore, it was maybe the first chance they had ever had to search for bugs and eat green plants. They would all bask in the sun, their eyes closed, and stretch out their legs, obviously relishing their freedom. Rose and June enjoyed being together, and they would sometimes preen each other.Rose was usually the first one to notice anything out of the ordinary in the yard, and was the first at the door of the coop to come outside, often jumping up several feet into the air and excitedly flapping her wings. Always shy, perhaps due to rough handling, perhaps just due to her own inherent personality, Rose was bolder with June at her side. I will never forget the sight of Rose and June running towards us through the muddy yard with boots of mud clinging to their feet so that they rocked from side to side and lifted their feet extra high.

Karen Davis of United Poultry Concerns writes, "If there is one trait above all that leaps to my mind in thinking about chickens when they are enjoying their lives and pursuing their own interests, it is cheerfulness. Chickens are cheerful birds, quite vocally so, and when they are dispirited and oppressed, their entire being expresses this state of affairs as well. The fact that chickens become lethargic in continuously barren environments, instead of proving that they are stupid or impassive by nature, shows how sensitive these birds are to their surroundings, deprivations and prospects. Likewise, when chickens are happy, their sense of wellbeing resonates unmistakably."

Rest in peace, Rose, cheerful, shy, sensitive girl. We love you, and will always miss you. 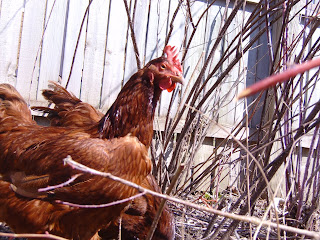 So sorry to hear about Rose - it's very sad!

I am sorry to hear about your loss.

Thanks to you both. She will be missed. We'll have some good news to post soon, I hope!

Thank you for giving Rose and June warmth, treats, vet care and compassion. Blessings on your names.

Thanks, Greenconsciousness. We're grateful to have known them both.