The Ultimate Vegan Reuben Sandwich and Some Personal and Omaha History

The last time I ever saw my mother alive was in February 2008, about a month before she passed. She was sitting on the living room couch, dressed in her best black pantsuit and a pink scarf I’d given her earlier that day, biting into a dripping vegan Reuben sandwich, murmuring, "Ohhhh, this is sooo good!" and rolling her eyes in appreciative culinary ecstasy. She had just gotten out of the hospital and was so happy to be home with my stepfather Andy, and eating well again. That it was a Reuben sandwich was not really by chance, because we’re from Omaha, Nebraska, and, according to Omaha legend, the Reuben sandwich was created there early in the last century, at the Blackstone Hotel. 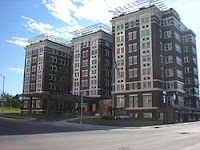 There has always been some historical debate about this, though. Some say the Reuben was invented in New York City. (I tend to hold with the Omaha version, not just because I’m an Omahan, but also because the niece of a famous Blackstone chef once rented a room from my mother, and assured us that the old story was true.) You can read more about the controversy and see a very retro menu from the Blackstone at the Nebraska State Historical Society’s "Weird Nebraska" website.

When I was a child in the 1960s and 70s, my mother and I would frequently find ourselves at the Blackstone's Golden Spur Grill after a winter's evening at the symphony, opera, or ballet, most often ordering the original (translated as: poor dead cow) version of the Reuben. In those days, my mother would have gone out of the house in curlers or (horror of horrors) blue jeans before she would have worn warm, sensible clothing for an evening out, so we shivered all evening in our too-thin dressy clothes. In those days, too, we would have thought ourselves deprived if we hadn’t eaten meat (read: some poor dead animal or another) at least twice a day. It wasn’t until the early 1990s, after my mother founded an animal rescue group that became an animal rights group, as well, and we had both had had our "and then it hit me" moments, realizing that not only the lives of puppies and kittens are important, but those of all animals. We both went veggie/vegan, and the old Reuben sandwich became a thing of the past.

We were always trying to come up with the best vegan version we could, and while the vegan Reuben my mother was so happily gobbling up that cold February night was a good one, the recipe below that I’ve just found comes the closest to duplicating that authentic, tangy Reuben taste of any recipe or version of the sandwich that I've tried. (And you don't even need Swiss shreez!) The (somewhat edited) recipe and the photo comes from a wonderful blog called Allison's Gourmet so please visit there for more yummy recipes.) Steve and I made these sandwiches for dinner on Friday, sans avocado, and we both thought they were really and truly right up there among the best sandwiches we've ever had, as Allison says, and they weren't alot of work, either. So, my quest for an authentic-tasting vegan Reuben sandwich is over. I just wish my mother was still here to enjoy one, too. 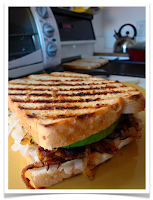 1) In a large saute pan over medium heat, heat 2 tablespoons sunflower oil and tempeh, browning tempeh on each side. Remove tempeh from the pan and set aside.

2) Add remaining oil and onion. Brown for 5 minutes, stirring occasionally. Return tempeh to the pan (leaving the onions in), and stir in garlic, bay leaves, paprika, caraway, dill, salt, vinegar, tamari, and black pepper. Add water and simmer for 30 minutes or until the water has evaporated and tempeh is infused with flavor and coated with a glaze. Remove bay leaves.

While the tempeh is sautéing, you will have plenty of time to prepare the Thousand Island Dressing: In a small bowl combine the following ingredients: 1/3 cup vegan mayonnaise, 2 tablespoons ketchup, and 3 tablespoons dill pickles, chopped. (I used sweet pickle relish, actually, and it tasted great.)

3) Heat a large skillet over medium-high heat. Spread two slices of bread with margarine. Grill for 3 minutes, until browned on one side only. Repeat for the remaining slices of bread.

This is Natasha, watching over her little brother Sergei, on one of their favorite boxes. You would probably not even think of eating either of them, so please, don't eat beautiful, soft-eyed cows, either. Thank you. 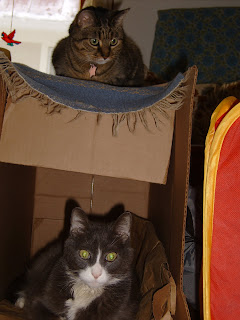