So many things have happened this year, we've had a hard time keeping up with it all. After the long, hard winter in the house without chicken friends after June and Rose passed away, Sara now has new companions, Emily and Anne Bronte, named after my beloved Bronte sisters. They came from Heartland Farm Sanctuary, which had just rescued ten hens when a man who'd kept chickens as companions for years was forced to give them up due to illness. 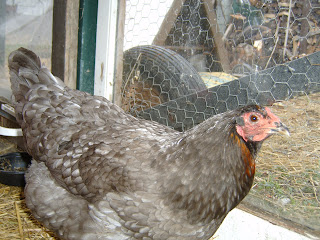 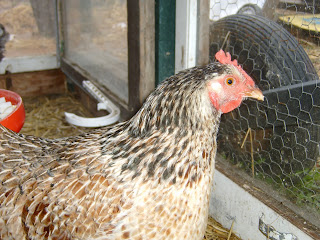 Emily, who looks part condor and sounds like a guinea hen) quickly became Sara's "second in command," but she's much more timid than her sister, Anne, who is very friendly and curious about any type of human activity. Both Emily and Anne have become much less shy of humans since they arrived in late March. All three girls accompany us around the yard while we search the grapes, hazelnuts and willows for Japanese beetles for them, and the rest of the time, enjoy their fruit and veggie treats and the yard's many plants and bugs. (Fallen raspberries and chickweed blossoms, yum!!) They love to explore their yard and dustbathe in the sun. When it's too hot, they hide in the raspberry bushes. All three are full of life and ready to enjoy all the pleasures their world has to offer them. 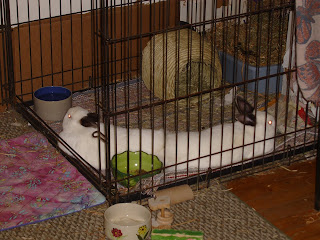 Looks like we traded Charm and Peridot in on a pair of rare Siamese twin rabbits, doesn't it? Our little moon rabbits are doing well, love each other dearly, and are teaching us patience and the ways of the rabbit. Pinecone bowling is a favorite pasttime. (Gotta get a video of that!)

On a very hot day in late May, there was a block party on our street for the first time since we moved here in 2003, with the youngest attendee, Zoe at age 2 months, and the oldest, Dave at...well, he's retired, anyway! It was great to hang out with all our neighbors and get to meet new ones, too. 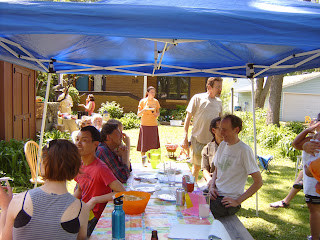 The first "Bike the Drive" of the year was a great success, again. 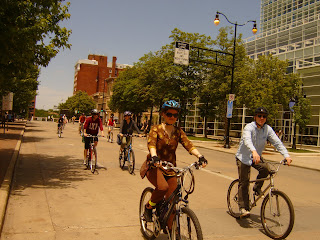 Some of the biggest streets in Madison were closed to motor traffic, and we joined friends Jenny, Chandi, Terese, Rob, Kenny and Steve's cousin Matt with thousands of others, riding our bikes for several hours on another very hot day on downtown streets that are normally full of cars. Picking flowers from the median of a 45 mph semi-highway---FUN! From there, we headed back to our own neighborhood to "Boombox the Wasteland," a sort of reclaiming event for some industrial and commercial land that was cleared for "development" but has stood idle for years now. WORT 89.9FM broadcast the event live all afternoon, and the hundreds of boomboxes folks brought along sang out while we danced, mingled and shared free food and created spray-paint artwork together. Naturally, we brought our solar-powered boombox! 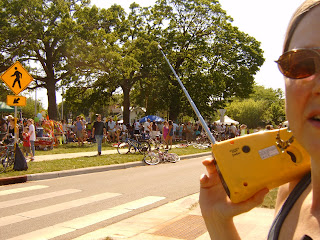 In late July, Steve installed a beautiful, energy-efficient front door (our old one was leaking air badly) that he got for $70 because it had a "ding" in it 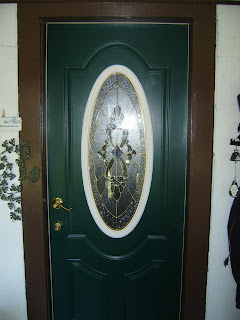 And we travelled to Omaha to see Andy and attend a Briggs family reunion up in Walthill, hosted by my sweet, smart cousin Christine and her equally wonderful husband Doug. (The best photo of the reunion, unfortunately, is of the oldest member of the family, this old Model A---or was it T?---circa 1935, that Doug still drives in parades!) 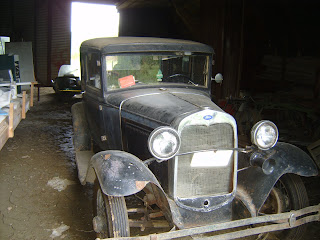 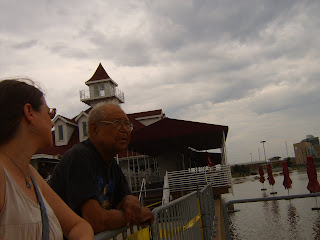 Never seen the Missouri River in flood stage like it is now! Andy and I are standing at what *shouldn't* be the river's edge, looking at what is usually the patio seating at the boathouse bar/restaurant where he hangs out with his friend Jim. (Jim's motorcycle is almost as cool as Andy's, which is gold instead of burgundy.) Andy and Jim rode up to Storm Lake, Iowa, a few hundred mile round trip, just a few weeks before this---and Andy will be 87 in November! 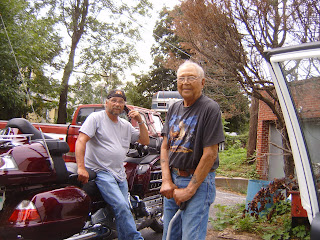 Friends Frances and Alan generously put us up in their beautiful cohousing home while were there, and we even got to join them for a (nearly vegan) dinner they hosted for some of new UU friends, who are now our friends, too. 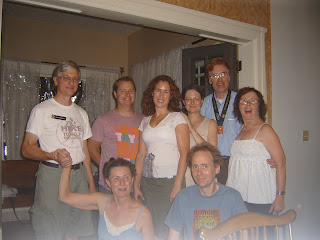 The protests continue, of course, although the crowds and frequency have dwindled. We attend the Singalongs at the Capitol as often as we can, and Steve has helped with phone calls, while our friends Susan, Bryan and Linda have travelled around the state going door-to-door. It's far from over, and we're in it for the long haul. 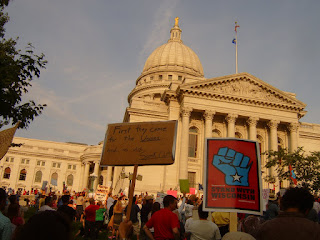 And here's our backyard's newest resident, sleeping in a shady, cool spot on top of the rain barrel! 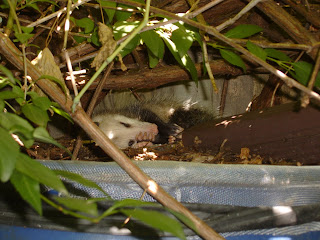 I like the green door. Hey I remembered you guys don't mind making ice cream the hard way so i thought of you when I saw this --looks so good!

Thanks, Gc! Oooh, that salted caramel pretzel ice creme look great, but I think I would just buy vegan chocolate-covered pretzels instead of making them. We have the frozen banana "soft serve" dessert all the time now; it truly tastes like banana ice creme.

me too -- and it tastes even better than the commercial stuff --sometimes i grind up a few almonds with it and sometimes i throw in that vegan cocoa for hot chocolate and then i have chocolate soft serve.

Hadn't even thought of that...even better! Have you tried making chocomole? Cocoa, agave, an avocado and a little bit of water and vanilla. We were so skeptical about using avocados as desserts, but have been converted now.

You should blog the recipe with pictures - the best thing is the name.CHOCOMOLE I just learned how to make microwave popcorn without supporting agri poison

We got the "Chocomole" recipe from "Crazy Sexy Cancer Diet," by Kris Carr. Highly recommend this book, too. The recipe is just 1/3 cup each of raw cacao powder/water/agave, plus 1 t. vanilla and an avocado. Pulse it in the food processor, and you've got fabulous, decadent-tasting vegan chocolate "mousse."

We try to avoid using the microwave whenever possible, but will check out the links. Thanks!

Wait, update to that Chocomole recipe---that's TWO avocados, not one! (It would be way too much sweetener with only one.) Sorry about that...

No problem - it takes me years to try new things

The link s/he gives within the article provides excellent detail, too:
http://www.foodnavigator.com/content/view/print/568593
So many wonderful things climate change can and is taking away from us. Another reason for vegan...