There have been many changes since I posted last, so here's the past 10 months in a rather large nutshell...

The bad news first: Sara Fezziwig Chicken passed away quite suddenly on September 1st; the temperature had climbed into the 90s, and she apparently died of heat stroke. It was quite a shock to find our beautiful golden queen chicken lifeless on the ground. Sara wasn't even 3 1/2 years old, but chickens who are raised for meat or eggs are sent to slaughter much earlier than that, at about a year and a half. Sara had the longest, happiest life we could possibly give her. We're so grateful she had one more summer with the run of the backyard, after her long winter spent indoors in 2010-11, when her best entertainment was chasing raisins, ripping into bunches of kale we hung up for her, visiting the rabbits, or pecking playfully at Sergei's toes. Here's Sara and her sister Sophia, at 10 months, on a beautiful March day in 2009. 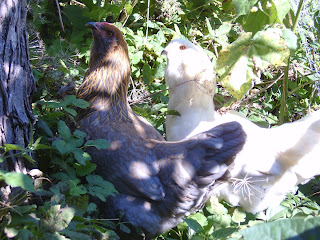 In October, cancer with a small "c," a basal cell carcinoma, was removed from my face. That's the type of skin cancer that kills practically no one as long as it's caught early, and mine was. They took it off, and that's the end of that!

Then on April 11th, we lost our little Natasha kitty to kidney problems. Steve adopted her at age 6 months or so in 1997, so she was at least 15 years old. A week before, Tashi was still racing around the backyard at top speed. Even if she spent most of the rest of her time curled in her heated bed, she was only very ill for the last few days of her life. We keep trying to remember what a long and happy life she had. 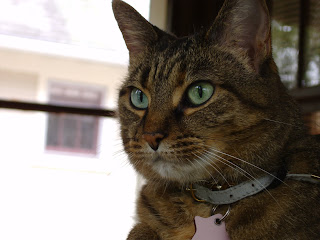 We miss Tasha terribly, and so does Sergei, who now sleeps with us every night, right up on our pillows. Very cozy and warm on cool nights. Another change has been that, in January, Steve's cousin Matt moved to North Carolina. It's been quite an adjustment not having him around any more after ten years, but he's glad to be back in those beautiful mountains. Here's Matt with Sergei perched on his shoulders, since there's no pillow available! 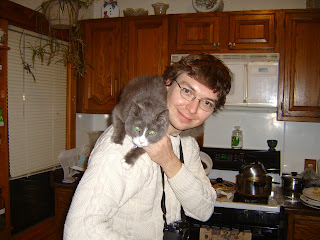 Charm and Peridot are doing well, snuggling together, merrily digging at old phonebooks, nibbling paper in their tube, and arguing over barley biscuit treats. 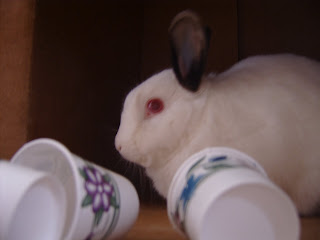 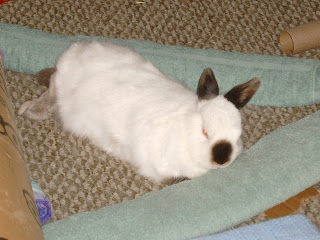 
They very much enjoying being petted. Some rabbits like being held, some don't, and while both Charm and Peridot like being held and cuddled, they're terrified when they sense I'm trying to pick them up, and race away. Problem is, rabbits need their nails cut every 3-4 months, so it's something that I must keep working on. And get help with their nails in the meantime. Every time I start to get discouraged about this, I remind myself that my knees actually have calluses from being on the floor with them so much!

Here's Carlie, who now shares the coop and yard with Anne and Emily; she looks much like June, but has a completely different personality. We call her our little aviator---Carlie's always looking up and flies to get where she's going at every opportunity---and she's a big talker, and has more than once been the first to sound the alarm at the sight of a hawk. 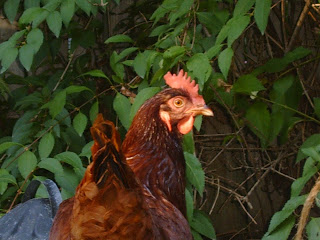 Our 50,000 bee girls and boys survived the winter very well, and Steve has been successfully treating them for mites, so they are healthy. About month ago, they swarmed, but Steve successfully coaxed the swarm into sticking around our yard, so we now have two hives.

Steve's mom and my stepfather Andy are doing okay, facing health issues that being in your 80s bring. Old age is not for sissies, as someone has noted, and they're both proving that. I don't believe I've ever posted photos of the cats that my mother rescued from the streets of Omaha, and who have now followed her over the bridge: Bonzi, Chatty, and Roo. 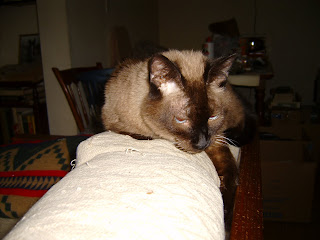 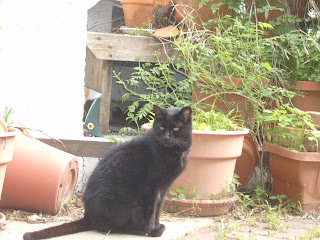 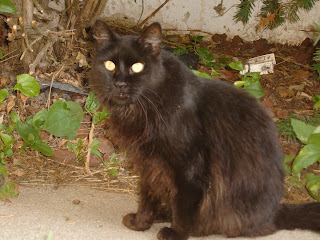 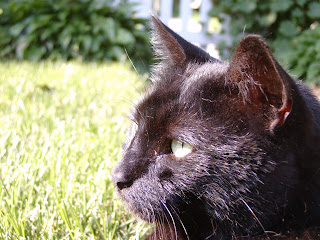 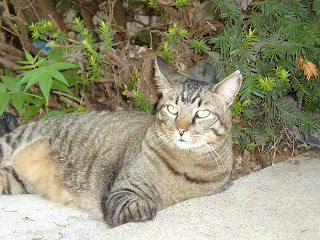 Other milestones: We celebrated our eighth wedding anniversary on Thursday. Steve's nephew Dustin will be graduating from high school this weekend, and so will my nephew Zach. It seems like only yesterday that they were little boys. And now my niece Liz and our friends Rob and Therese have baby boys, both born last October. We had more record-breaking heat in March, and are now having a warm spring, in general, so everything is happening way ahead of schedule: lilacs blooming, butterflies hatching out, frogs singing, shiitake mushroom logs fruiting. Until last night when a thunderstorm passed through, the soil was getting very dry, and we're actually looking forward to a rainy few days to come.

Today, Steve is putting in a new kitchen counter to replace the one that was falling apart, so many of the things that usually live in the kitchen have migrated to the living room. The new counter is much needed, but for now, things are a tad bit chaotic... 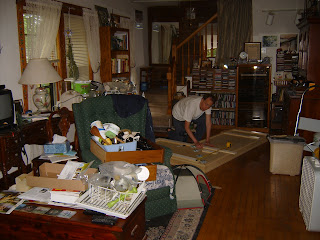 I made the most delicious vegan Sour Creme Banana Bundt Cake yesterday---and then Steve made another one again this morning! Here's the recipe, from the ever-reliable veganyumyum.com(http://veganyumyum.com/2007/03/sour-cream-banana-bundt-cake/)where you can also see a nice photo of the cake. Blogspot has changed some things, and I haven't yet figured out how to put a link in a post...maybe next time!
Sour Cream Banana Bundt Cake
*Makes one bundt cake

Mix wet ingredients into the dry, adding a tablespoon or so of soymilk if needed. Batter will be thick but not dry. Pour evenly into the bundt pan and bake for 50 minutes or until a toothpick comes out clean. Let cool completely before removing from pan.

Here's one more photo of Natasha, who was very fond of cake: 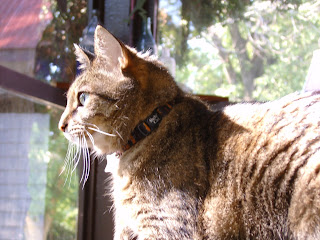 Posted by Marina and Steve at 6:55 PM

So nice to catch on on your beautiful life -- good luck with the kitchen --much needed changes are such a relief when finished. I put in my garden and look forward to the rain. It can rain every day as far as I am concerned.

Something is wrong with my youngest cat and money is tight. But the vet is coming tomorrow and I will just be on a diet this month which will be VERY good for me!

Yes, our rabbits have definitely helped us eat more greens. They don't like many veggies, actually. I hope your cat is okay.

I'm so sorry to hear about the cat - we just went through that as well with our 17 1/2 year old cat.

Have patience with the kitchen remodel- it'll be worth it in the end!

Thanks! Natasha was one of a kind. I'm sorry to hear about your kitty. It's not easy to let them go.

The counter is now installed, and it looks beautiful, but I think if I were to start from scratch with a kitchen remodel, it would not have any counters at all. Easier and more sustainable, I think, just to have a free-standing sink and put tables, hutches, shelves, etc., into the room instead. My friend Susan's kitchen is like that, and it's a very homey look, too.